Posted: April 30, 2016
By VIC BRADSHAW
HARRISONBURG — Jenny French is learning her way around the White House. 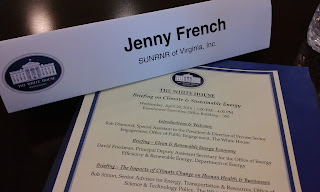 The president and co-owner of SUNRNR of Virginia has made three by-invitation trips to 1600 Pennsylvania Ave. in the last 13 months. On April 20, she was part of a group that attended a three-hour briefing on climate and sustainable energy in the Eisenhower Executive Office Building on the White House grounds.
“I’ve been so deep in the business that this reminded me that [climate change is] not just about renewable energy,” said French, whose company makes portable units that can generate and store renewable energy. “All businesses, all people will be impacted.
“This pulled me out of my job to see the bigger picture.”
French was invited to the event by Business Forward, an organization comprised of a wide range of companies from across America that advocates ways the federal government can make it easier for businesses to create jobs and advance the economy. The White House Business Council also was involved in the event.
She said Sen. Mark Warner’s office put her on Business Forward’s radar.
White House staff members and a U.S. Department of Energy official led the briefing. The clean and renewable energy economy, the impacts of climate change on human health and business, and Obama administration priorities on climate were the main discussion topics.
The importance of climate to national security, French said, also was discussed.
The overriding message, she said, was that climate affects large and small businesses. The briefing included more than 50 business leaders from across the country in fields ranging from renewable energy to food security to apparel to construction.
Among those who spoke for the businesses in attendance were someone from a ski resort that has suffered from unusual weather patterns to someone whose supply chain was disrupted by storms overseas.
French, a Harrisonburg resident whose company is based in Shenandoah, said she came away thinking about climate change as a global economic issue that should be dealt with.
“We need to try to let people understand the urgency of this,” she said, “without getting into the political ramifications or sides.”
Thinking Green
Climate change wasn’t directly on the agenda on either of French’s trips to the White House last year. She attended a White House Small Business Exporters Roundtable to discuss foreign trade issues, sitting next to President Barack Obama during part of the event, and was invited back when the president signed the Trans-Pacific Partnership.
In November, she was part of a U.S. trade mission to the Canary Islands.
French said winter is the slow season for SUNRNR (pronounced like “sunrunner”), a portable and storable system that can capture and store power generated by the sun, wind or water.
So with the help of some students from James Madison University, efforts were focused on a “soft rebranding” that included refining the company’s message, its documents and a rethinking of its name.
Many people are confused by SUNRNR, she said, so they’re considering changing it to “SUNRUNR.” The full term “sunrunner” already is trademarked.
A new product also was developed to add more solar panels. French said existing customers were contacted and told about that development, which led to additional sales and helpful customer feedback.
Multiple signs are pointing to new business for the company, she said, mainly because of the assistance it’s received from local, state and federal sources. Two dealers are meeting tomorrow to discuss sales to Zambia in southern Africa, and contacts made on the Canary Islands trip could result in the hiring of a sales representative in Mauritania in western Africa.
Her latest White House visit, French said, has her thinking “green.” The color symbolizes money and the ecology, but it also represents naiveté when it comes to climate change.
“We’re not getting the urgency,” she said. “This is urgent, whether it’s the flooding in Houston or the sea level rising in Norfolk.”
Contact Vic Bradshaw at 574-6279 or vbradshaw@dnronline.com
Posted by Unknown at 10:00 AM