In early October, 2015, Category 4 Hurricane Joaquin tore through the Bahamas causing torrential rainfall, storm surge flooding and total blackouts. On Crooked Island, one of the hardest-hit islands, about 85 percent of the homes in one settlement were reportedly destroyed, and residents were isolated without fresh water, power, or communications. A makeshift health clinic was set up in what was left of the airport terminal, but without power, the clinic was severely limited without lighting and the ability to refrigerate medicine.

Seven days after the storm, that critical power was restored to the clinic by a SUNRNR Portable Solar+Storage Generator, delivered through a massive relief operation. 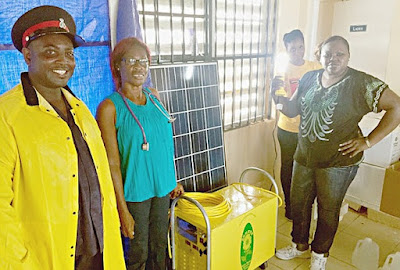 “I cannot believe that a road can be totally taken by the seas. Its unbelievable…You have to see this to believe it.”
- Island Official
As was the case with Hurricane Joaquin, severe weather events can escalate rapidly, and damage to infrastructure and communication systems can delay relief efforts. In a calamity like the recent Nepal earthquake where road access was cut off and no relief solution could be trucked in, countless people are left without the light, communication, or clean drinking water that is so critical for survival.

Portable and decentralized power systems that produce energy on-site and off-grid can be an immediate, life-saving tool during and after emergencies.
John Hingley, creator of Renovagen Roll-Array, says delivering fuel for diesel generators can be impossible or cost-prohibitive in many circumstances. His company’s new thin, portable solar panel can be air-dropped from a helicopter and unrolled like a carpet. The 50 meter long “micro-grid-in-a-box” can be in full operation a few minutes after it is deployed and could be used, Hingley says, to power a remote hospital, forward operating base, or off-grid mining station.

The lack of wastewater treatment in remote regions or in devastated communities can quickly develop into a health crisis.  REGEN, the world’s first solar powered, mobile wastewater treatment plant, fits into two shipping containers and doesn’t require a highly skilled operator on-site once the system is installed. The company’s target markets include humanitarian organizations directing disaster relief and refugee settlements, agricultural and mining operations, and remote rural communities.  “Small, isolated villages…have limited infrastructure budgets,” says co-founder Dr. Patrick Kiely.  “They ship in diesel once a year at great expense and use it to run everything. A renewable, self-powered wastewater system solves a multitude of problems.”

No Noise, No Fuel, No Fumes: Portable Solar Power Is Leading The Charge

Many of the recent developments in portable renewable power had their testing grounds within military and industrial applications.  Essential needs like lighting, clean water and sanitation, and communication capabilities hold true not just for humanitarian missions but also for forward military operations, construction sites, and mining stations.

Renewable energy is a viable, cost-saving alternative for the construction industry, says the managing Director for Laing O-Rourke, developer of the world’s first fully redeployable large-scale solar-diesel hybrid power plant. “As specialists in major remote and regional projects, we have an opportunity to harness vast amounts of solar energy at our projects, for a sustainable engineering solution. Construction and engineering must break away from traditional processes if it is to evolve and deliver projects quickly, safely and more sustainably.”

The old model of generating electricity has always relied on transporting fuel or creating power far away and then transmitting that power. But now through the use of portable solar, wind, and water generators, communities and companies are able to shift to a “Small and Distributed” energy system – one that can produce reliable and life-altering power, on-site and on-demand.