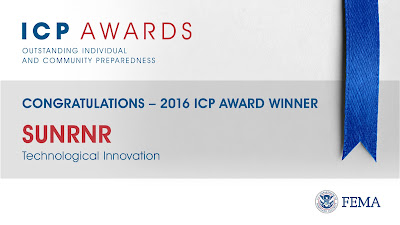 “We are more prepared for disasters when everyone in the community works together,” said FEMA Administrator Craig Fugate. “FEMA is proud to honor individuals and organizations who are building communities that are more prepared for emergencies through creativity, innovation and collaboration.”

The 11 FEMA Individual and Community Preparedness Award recipients will be recognized on September 13, 2016 in Washington, D.C. During the recognition ceremony, recipients will share their experiences, success stories, and lessons learned with fellow emergency management leaders. Jenny and Scott French will represent SUNRNR at the event.

“Having reliable, affordable and clean power backup during an outage or emergency isn’t just a pipedream anymore,” says SUNRNR of Virginia’s Jenny French. “You can prepare for that inevitable “rainy day” and store some sunshine and grid power to use during emergencies,” she added.

SUNRNR (“Sun Runner”) of Virginia, Inc. manufactures a product useful before (mitigation), during (response), and after (recovery) such emergency-related lack of electrical power.  Public education and the promotion of preparedness are a major element of SUNRNR’s mission, with the goal of encouraging system owners, both personal and commercial, to be better prepared for the dangers and after-effects of a disaster and to participate in the response and recovery efforts.

In addition to the FEMA recognition, SUNRNR is also participating in FEMA’s annual National Preparedness Month during September by offering an “Are You Powered for Emergencies?” online Q & A event that will allow participants to post questions or comments about how to identify and prepare for emergency power needs, how to use stand-alone power to respond to and/or support recovery after disaster events, and overall, how to implement a sustainable power strategy. Interested individuals should visit http://tinyurl.com/jjhxn4p to join the chat.

National Preparedness Month is an awareness-raising event aimed at educating and empowering Americans to prepare for and respond to all types of emergencies, including natural disasters and potential terrorist attacks. The monthly series of public service announcements and events culminates in America’s PrepareAthon! on September 30. More than 6 million organizations, businesses and individual citizens have already signed up to participate in the PrepareAthon.

As an added incentive for citizens be more prepared for all types of emergencies, SUNRNR will offer $150 off an upgrade to a second set of solar panels with any purchase of a SUNRNR portable generator system through September 30, 2016. If buying in the U.S., purchasers have the option of receiving a free AC-DC charger with purchase instead.

The online chat and sales promotion are part of SUNRNR’s ongoing commitment to educate consumers about energy issues, consumption, and conservation in relation to disaster preparedness.  Together, the hundreds of SUNRNR’s in use to date would make a 135kW solar-plus-storage power plant, but with no infrastructure required. Combined, their total 1GWh would have required over 300,000 gallons of fossil fuel (2700 tons CO2) for comparable gas generators, or caused 700 tons of emissions if grid-generated.